Richard Fazio, originally from Pittsburgh, received his Master of Music and his Doctor of Musical Arts from the Catholic University of America School of Music. He also completed advanced studies in conducting/Master Classes at the Juilliard School, Philadelphia Professional Ensembles Institute, the Brockport Music Festival in New      York, and the American Summer Conductors’ Institute held at West Virginia University.  His teachers include Giampaolo Braccali, Otto-Werner Muller, Dr. Robert Garofalo, Sergiu Commissiona, Piotr Gajewski, and Donald Portnoy. In 1981 Dr. Fazio was one of 25 conductors selected nationally to participate in the Gino Marinuzzi International   Conducting Competition in San Remo, Italy. He was also selected as a participant for Masterclasses in opera performance and conducting with Sarah Caldwell at the Wolf  Trapp Center for the Arts.

Dr. Fazio served for five years as Artistic Director for The Metropolitan Bach Festival in Maryland and was Music Director/Conductor for the Washington Savoyards, a Gilbert and Sullivan (G&S) Opera Company, for 11 years. During that time, he conducted the entire G&S repertoire. He has returned on several occasions, including a November 2008 production of Patience.  Maestro Fazio has also served as conductor for the Summer Opera Theatre Company in Washington, DC, for their production of The Merry Widow. He has conducted the Catholic University Orchestra and the Trinity Chamber Orchestra for the Metropolitan Ballet Theater Company in Maryland.

Dr. Fazio has taught instrumental music in the Montgomery County School System teaching in both the elementary and secondary levels for 46 years. From 2001-2005 he served as a part-time faculty member at the Catholic University of America as director of the Wind Ensemble and lecturer in Instrumental Music Curriculum, Pedagogy and Brass Methods. He has also served as conductor for the Potomac Valley Youth Orchestra of Maryland and the Montgomery County Honors String Orchestras.

Dr. Fazio welcomed the new millennium as founder and Music Director/Conductor of the Trinity Chamber Orchestra, now in its 22nd Season, which performs outstanding music form the Baroque, through the 21st century, all for the honor and glory of God under the patronage of the Most Holy Trinity. Under Maestro Fazio’s continued leadership, the TCO has grown in excellence, outreach, and programming, performing new works and giving young talents performing opportunities. The TCO has been awarded multiple grants from the Montgomery County Council of the Arts for its diversity and innovative programming.

Dr. Fazio is the author of two Study Guides and Reference Manuals in Music History and Theoretical Functions. 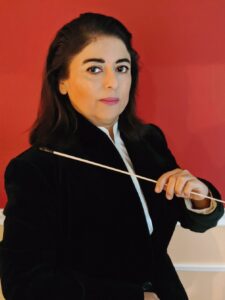 Dannice Crespo started violin lessons at age 9 with maestro Daniel Perego at the Instituto de Bellas Artes in Santa Cruz, Bolivia. When coming to the United States of America she graduated in Violin Performance from the University of Central Arkansas, where she was a scholarship student under Dr. Linda Hsu. In addition, Ms. Crespo found herself very inspired by famous young American violists and started studying the viola while in undergraduate school. In 2002 Ms. Crespo joined The Madeira School as the violin/ viola instructor. In 2017 she obtained an M.M in Viola performance from George Mason University. She studied with Mr. Philippe Chao from the Kennedy Center National Opera. While completing her instrumental studies Ms. Crespo decided to take a position as a conductor of a children’s orchestra at the prestigious Westminster School in Northern Virginia. During the first year, she took her orchestra to a competition. It was then that she brought the Best Orchestra Award, as well as the Overall Grand Champion Award. The following year Dannice started studying conducting at Catholic University under the expertise of maestro Murry Sidlin. In 2020 she was appointed as Assistant Conductor with Trinity Chamber Orchestra.