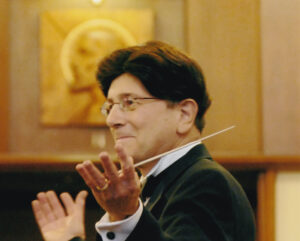 The Trinity Chamber Orchestra (TCO) of Washington DC is a highly-skilled, approximately 45-piece orchestra comprised of dedicated, highly skilled musicians from the tri-state area who love playing classical music and making that music available to audiences of all ages throughout the Washington Metropolitan area. The TCO performs music that includes works for the large chamber orchestra and smaller ensembles where it is able to feature its fine soloists.  Under the expert direction of Maestro Richard Fazio, the TCO performs four concerts per year. The TCO is chartered in the State of Maryland as a non-profit organization. All donations are fully tax-deductible.

HISTORY – In the summer of 1999, the foundational work of the TCO was nearing completion. In October a preview concert was performed in Holy Trinity Catholic Church to introduce this new orchestra to the community. The concept for our opening was, “A new Millennium – a new Orchestra!” With the grace of God and much hard work, our dream came true.  In the new millennium, on January 16th   the Trinity Chamber Orchestra performed its first glorious concert in Holy Trinity Catholic Church to a very excited and enthusiastic audience.

Over the course of its twenty-Two seasons, The TCO has performed a fabulous variety of classical and new works.  In addition, The TCO has developed several annual events; the “Annual Youth Concert and Competition” featuring some of the areas finest young musicians, and “An Afternoon at the Opera” featuring promising new vocal artists.

What People Are Saying

“…Fazio exhibits musical excellence and high professional standards.”
The Washington Post
“…Fazio conducted with clarity and balance and brought out the music’s sparkle”
The Gaithersburg Gazette
Dear Maestro:
Thanks for another splendid, incredible concert.  We thought that all the Brahms compositions were performed brilliantly under your direction, with lots of accuracy, and feeling, a real treat.  I had goosebumps in the 4th movement.  The orchestra seems to have enlarged, and the positioning of the musicians has markedly improved the sound, most enjoyable. Thanks again, we enjoyed it greatly.
What a most incredible, fabulous concert, one of the very best we have attended. all the artists and singers were magnificent, producing exquisite, most stellar music. we loved all of it-sent goosebumps!. An outstanding performance!